Musculoskeletal models have become important tools for studying a range of muscle-driven movements. However, most work has been in modern humans, with few applications in  other  species.  Chimpanzees  are  facultative  bipeds  and  our  closest  living relatives,  and  have  provided  numerous  important  insights  into  our  own  evolution.  A  chimpanzee  musculoskeletal  model  would allow integration across a wide range of laboratory-based experimental data, providing new insights into the determinants of their locomotor  performance  capabilities,  as  well  as  the  origins  and  evolution  of  human  bipedalism.  Here, we described a detailed three-dimensional   (3D)   musculoskeletal   model   of   the   chimpanzee   pelvis   and   hind   limb.   The   model   includes   geometric representations of bones and joints, as well as 35 muscle–tendon units that were represented using 44 Hill-type muscle models. Muscle architecture data, such as muscle masses, fascicle lengths and pennation angles, were drawn from literature sources. The model permits calculation of 3D muscle moment arms, muscle–tendon lengths and isometric muscle forces over a wide range of joint positions.  Muscle–tendon  moment  arms  predicted  by  the  model  were  generally  in  good  agreement  with  tendon-excursion estimates  from  cadaveric  specimens.  Sensitivity  analyses  provided  information  on  the  parameters  that  model  predictions  are most and least sensitive to, which offers important context for interpreting future results obtained with the model. Comparisons with a similar human musculoskeletal model indicate that chimpanzees are better suited for force production over a larger range of joint positions than humans.  This  study  represents  an  important  step  in  understanding  the  integrated  function  of  the neuromusculoskeletal systems in chimpanzee locomotion. (Journal of Experimental Biology 216, 3709-3723) 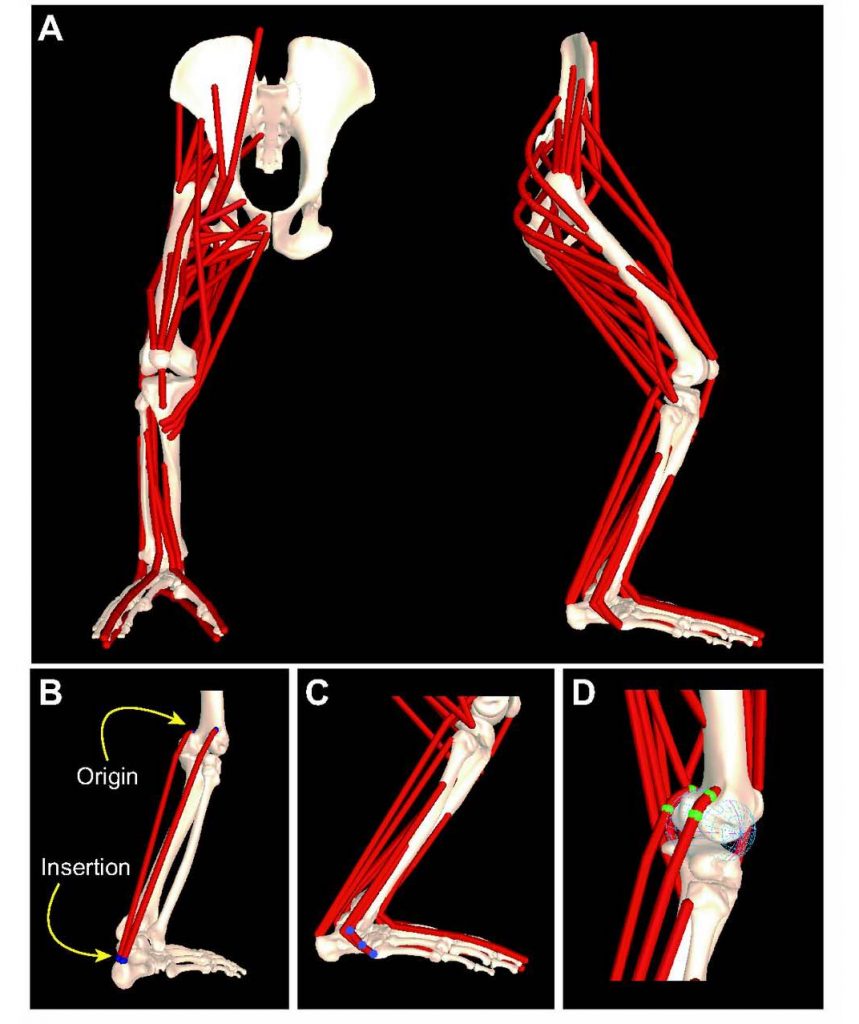 An OpenSim version of the chimpanzee pelvis and hind limb model may be downloaded here:  https://simtk.org/projects/chimphindlimb