Representative activity profiles for chimpanzee lower limb muscles were created by taking the plots of the 75th plus 50th quartiles of EMG activity during a sample of bipedal walking steps (scaled to the maximum burst observed during the recording session) for different recordings from the same individual, and for recordings from the two individuals, making each semitransparent and then superimposing them graphically. The resulting activity profiles are presented here alongside dissection images of particular chimpanzee lower limb muscles (adapted from Diogo et al., 2013).

EMG activity for muscles crossing the hip during bipedal walking 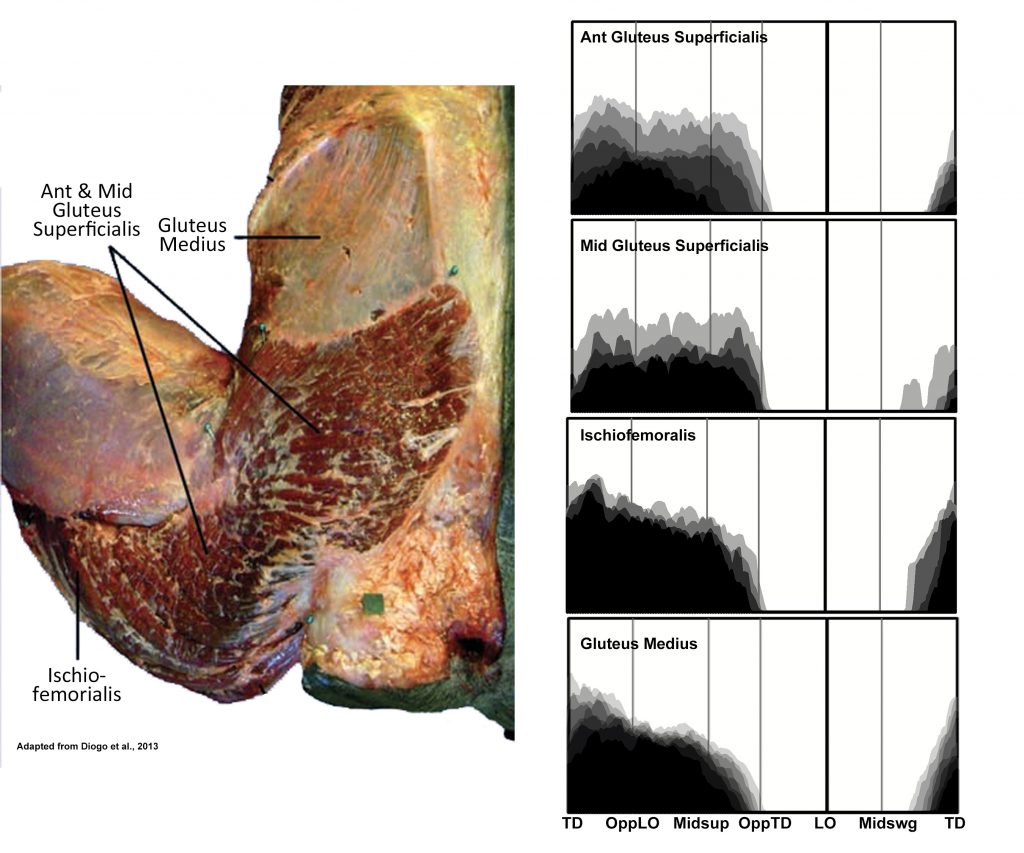 Gluteus superficialis in a chimpanzee is much smaller than the corresponding muscle (gluteus maximus) in a human.  It is functionally partitioned into anterior, middle and posterior portions.  The latter is more commonly named ischiofemoralis reflecting its origin from the ischial tuberosity and insertion onto the shaft of the femur.  The anterior and middle portions of gluteus superficialis are fairly thin, while ischiofemoralis is a substantial muscle and a major hip extensor.  During bipedal walking it acts to prevent the flexed hip from collapsing under the weight of the body.

Gluteus medius is positioned deep to the gluteus superficialis and arises from the dorsal surface of the ilium.  It acts to medially rotate the flexed thigh during stance phase thereby aiding in balancing the pelvis on the supporting limb (Stern and Susman 1981). 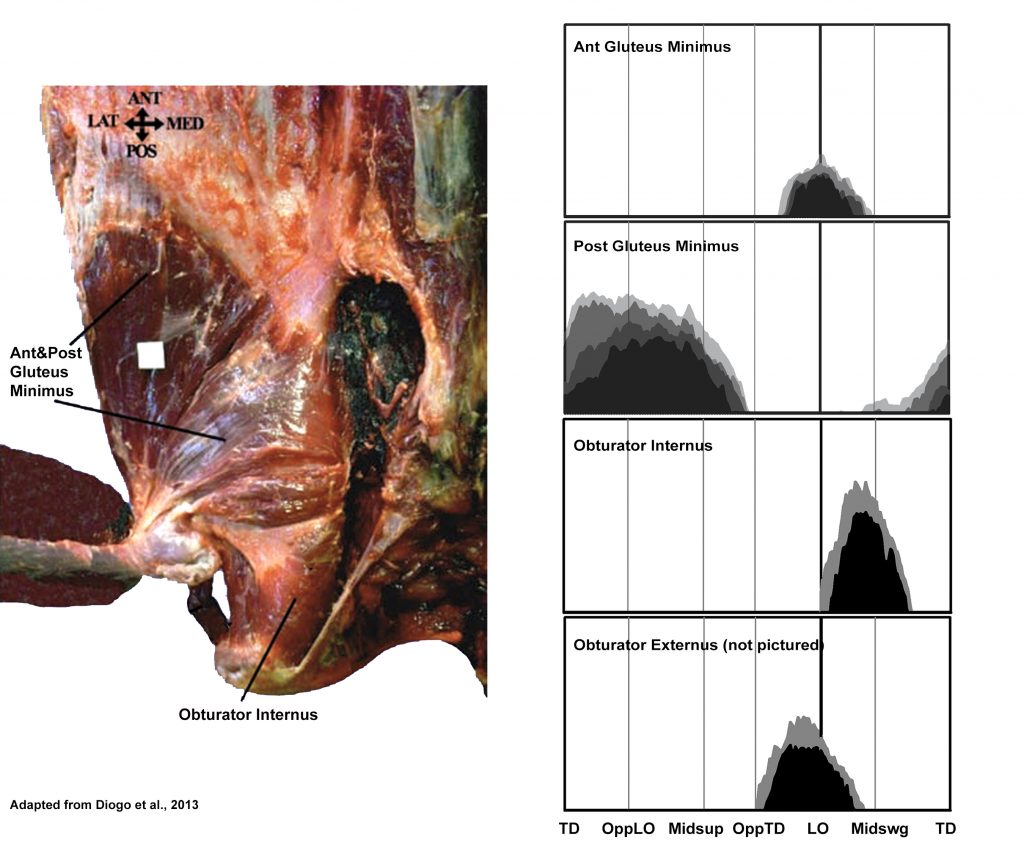 Gluteus minimus arises from the dorsal surface of the ilium inferior to the attachment area for gluteus medius.  It is divided into an anterior and posterior portion.  While the posterior portion displays a pattern of activity similar to gluteus superficialis, the anterior portion acts at the end of support into the beginning of swing phase, when flexors of the hip such as iliopsoas are active.  The anterior position of its origin and fiber orientation suggest is assists in hip flexion.

Obturator externus and obturator internus: Stern and Larson (1993) report that obturator externus in chimpanzees is recruited in all lower limb motions that involve visible lateral rotation of the thigh; while obturator internus is active only on occasions when lateral rotation is accompanied by abduction of the thigh.  In regard to the recruitment of these muscles during bipedal walking, Stern and Larson (1993) observed an interaction in the recruitment of obturator externus and adductor longus leading them to conclude that the late support early swing phase activity of the former is probably to counteract the medial rotatory effect of the anterior adductor muscles acting at the same time.  They suggested that the recruitment of obturator internus during the first half of swing phase could be related to abduction/lateral rotation of the thigh during that period, or to the need to counter some adductory/medial rotatory motion created by other muscles acting at the same time. 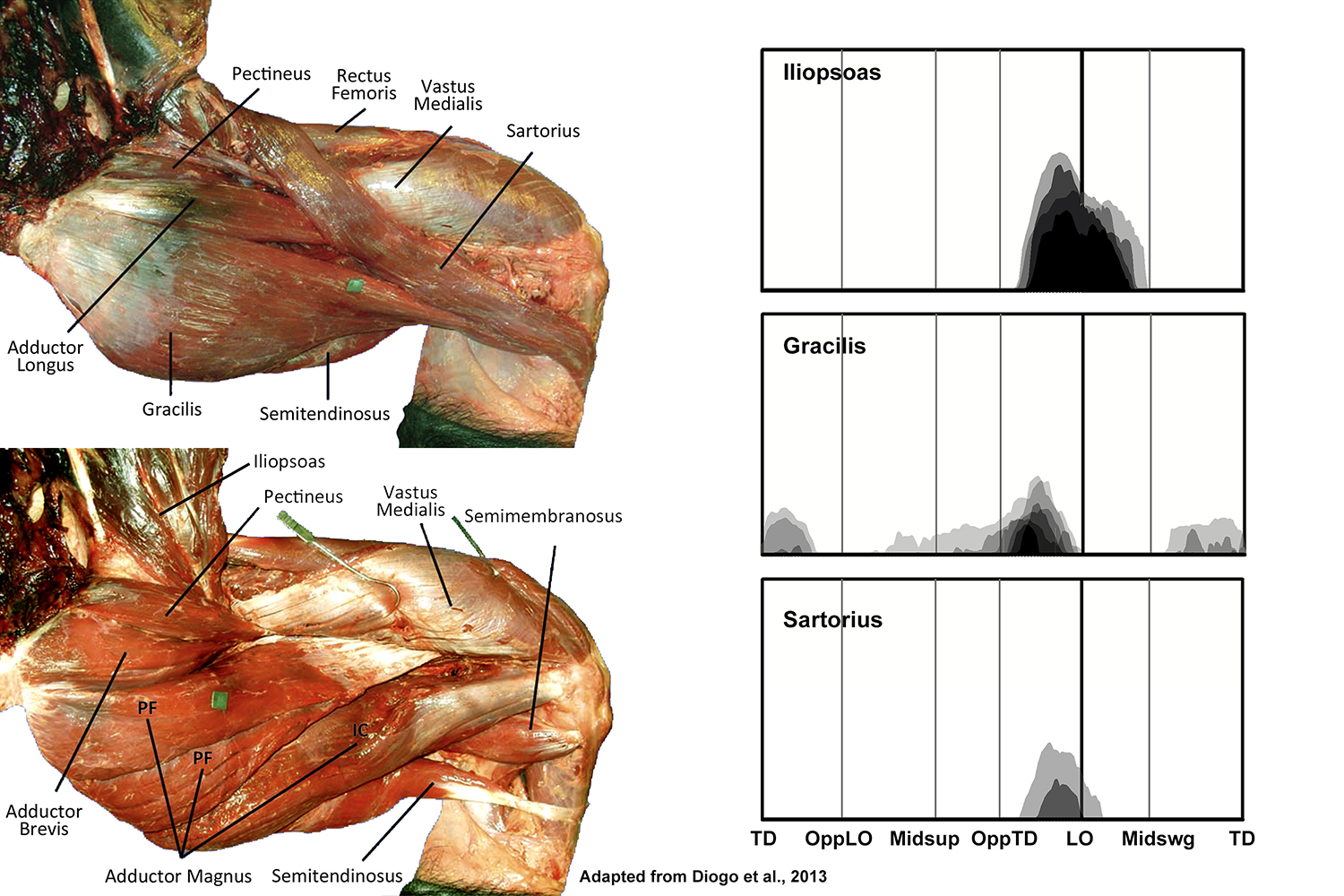 EMG activity profiles for the iliopsoas, sartorius, and gracilis in chimpanzees during bipedal walking. Illustration by Susan Larson, nd

Iliopsoas is active from the end of support phase into the beginning of swing phase of bipedal walking, acting to flex the thigh.  This motion begins before lift-off and end at about midswing; thereafter the foot moves forward by extension at the knee (O’Neill et al. 2015).  Of the potential thigh flexors acting during bipedal walking, iliopsoas is recruited the most consistently and at the highest amplitudes, suggesting it is the principle thigh flexor.

Gracilis and sartorius both display variable low amplitude activity toward the end of support phase corresponding to the beginning of iliopsoas recruitment, presumably offering some assistance to the initiation of thigh flexion. 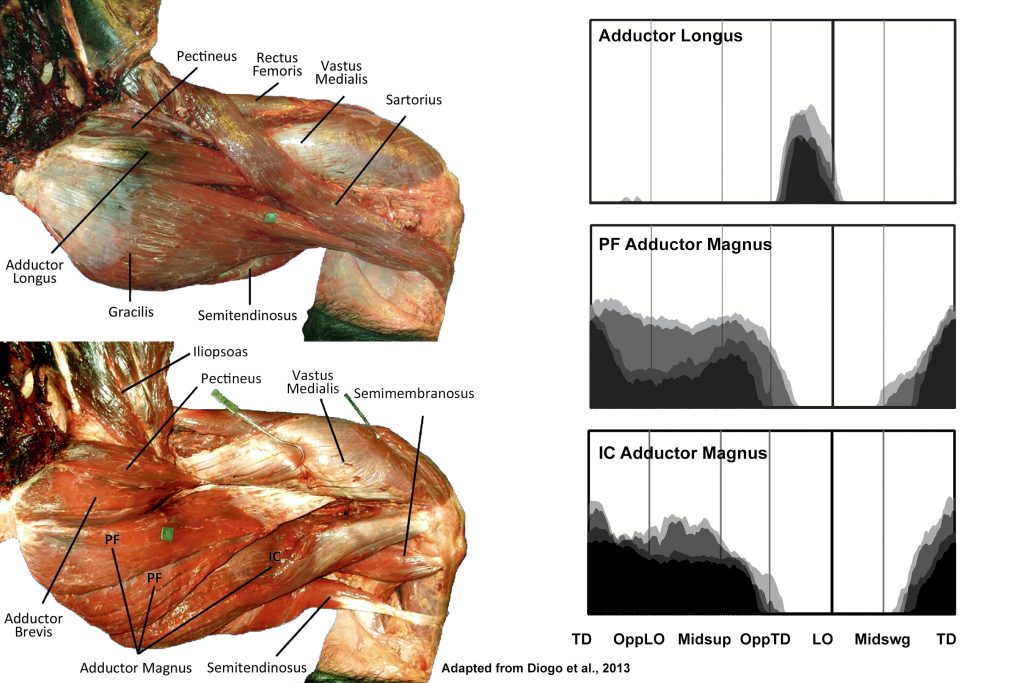 EMG activity profiles for the adductor longus and adductor magnus in chimpanzees during bipedal walking. Illustration by Susan Larson, nd

Adductor longus is active at the end of support phase stopping at or immediately after lift-off.  As in humans, this activity is likely related to terminating stance phase and initiating swing phase.  Stern and Larson (1993) suggest that the simultaneous recruitment of obturator extenus serves to counter the tendency for adductor longus to cause medial thigh rotation.

Adductor magnus can be divided into two portions: the pubofemoral component that arises from the inferior pubic ramus and inserts onto the femoral linea aspera, and the ischiocondylar part that arises from the ischium and inserts onto the adductor tubercle on the medial femoral epicondyle.  The ischiocondylar portion of adductor magnus is generally considered to be more of a hip extensor than adductor, and displays high amplitude activity through most of support phase like other hip extensors (e.g., ischiofemoralis, long head of biceps femoris).  Adductory force provided by the pubofemoral portion of adductor magnus is probably related to the consistently abducted position of the chimpanzee thigh during stance phase (O’Neill et al. 2015). 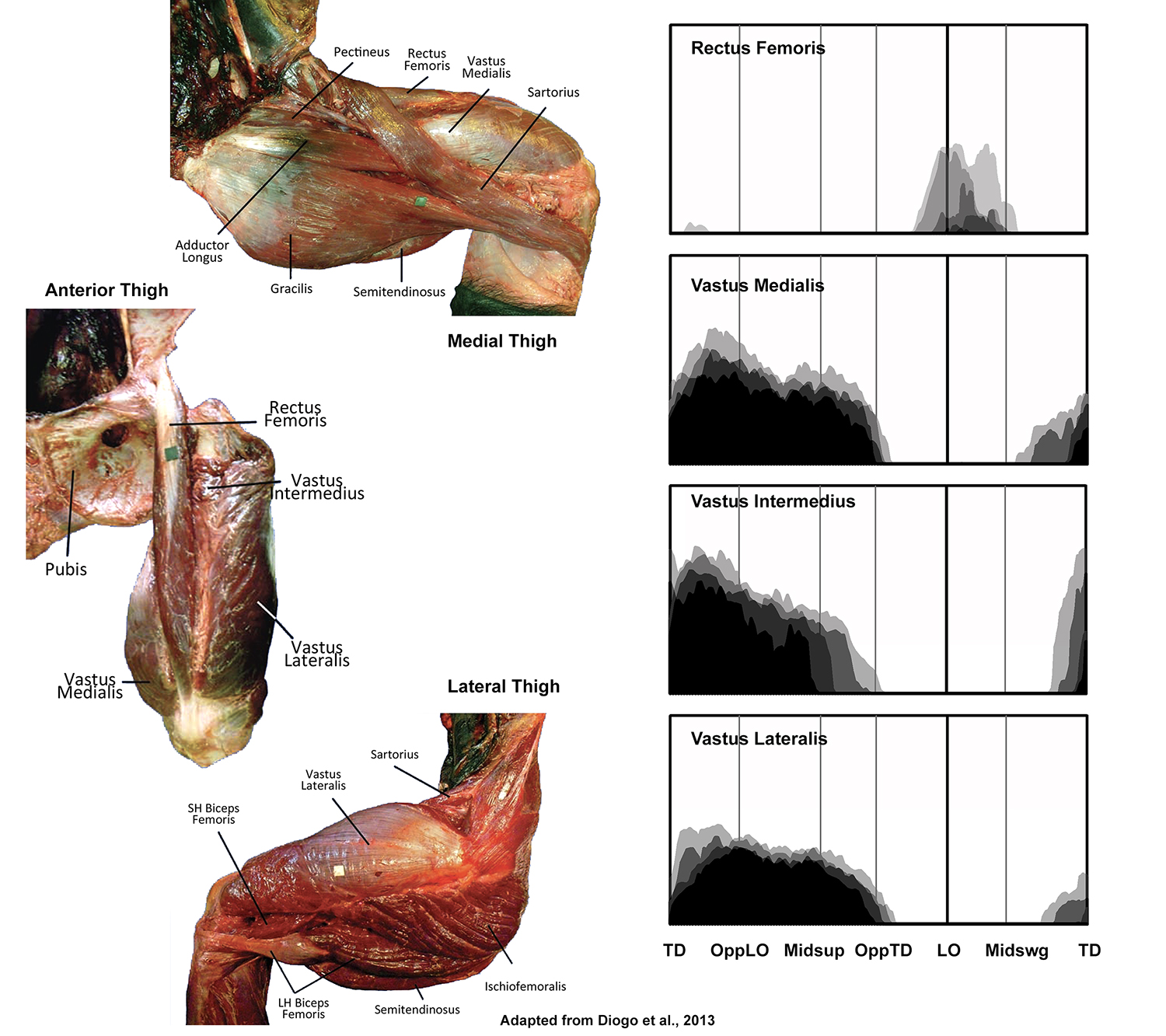 Quadriceps femoris is composed of four components that all converge onto the patellar tendon for their insertion.  Rectus femoris arises from the anterior inferior iliac spine and is the only component that crosses the hip joint.  During bipedal walking it is not active during support phase as are the other three parts of quadriceps, and instead displays variable activity during the first half of swing phase.  It appears therefore that its recruitment is related to the hip rather than the knee and is probably assisting in hip flexion.  The three vasti all arise from the shaft of the femur and are only capable of supplying knee extensor force.  All are recruited from ipsilateral touchdown to opposite touchdown, and prevent the knee from collapsing into flexion during weight support. 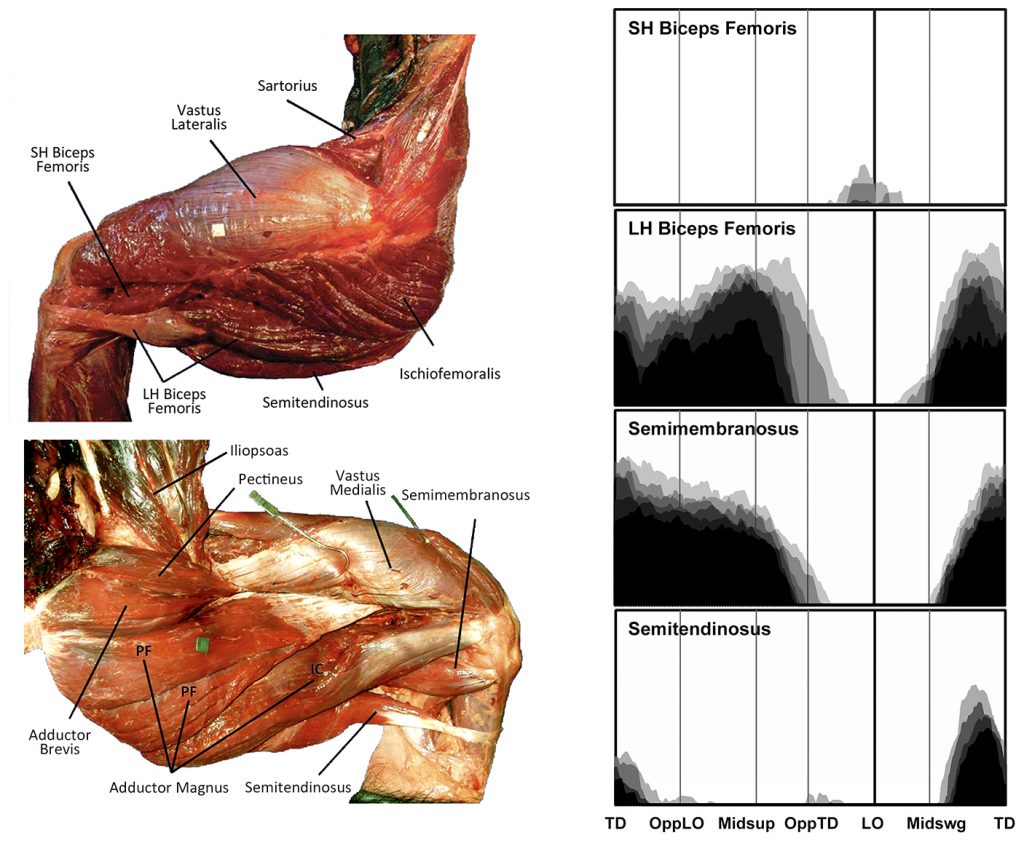 EMG activity profiles for the biceps femoris, semimembranosus and semitendinosus in chimpanzees during bipedal walking. Illustration by Susan Larson, nd

The short head of biceps femoris arises from the femoral shaft and inserts onto the fibular head and lateral leg, and is only capable of flexing the knee.  During bipedal walking is displays variable activity at low levels around lift-off, probably helping to lift the toes off of the ground. 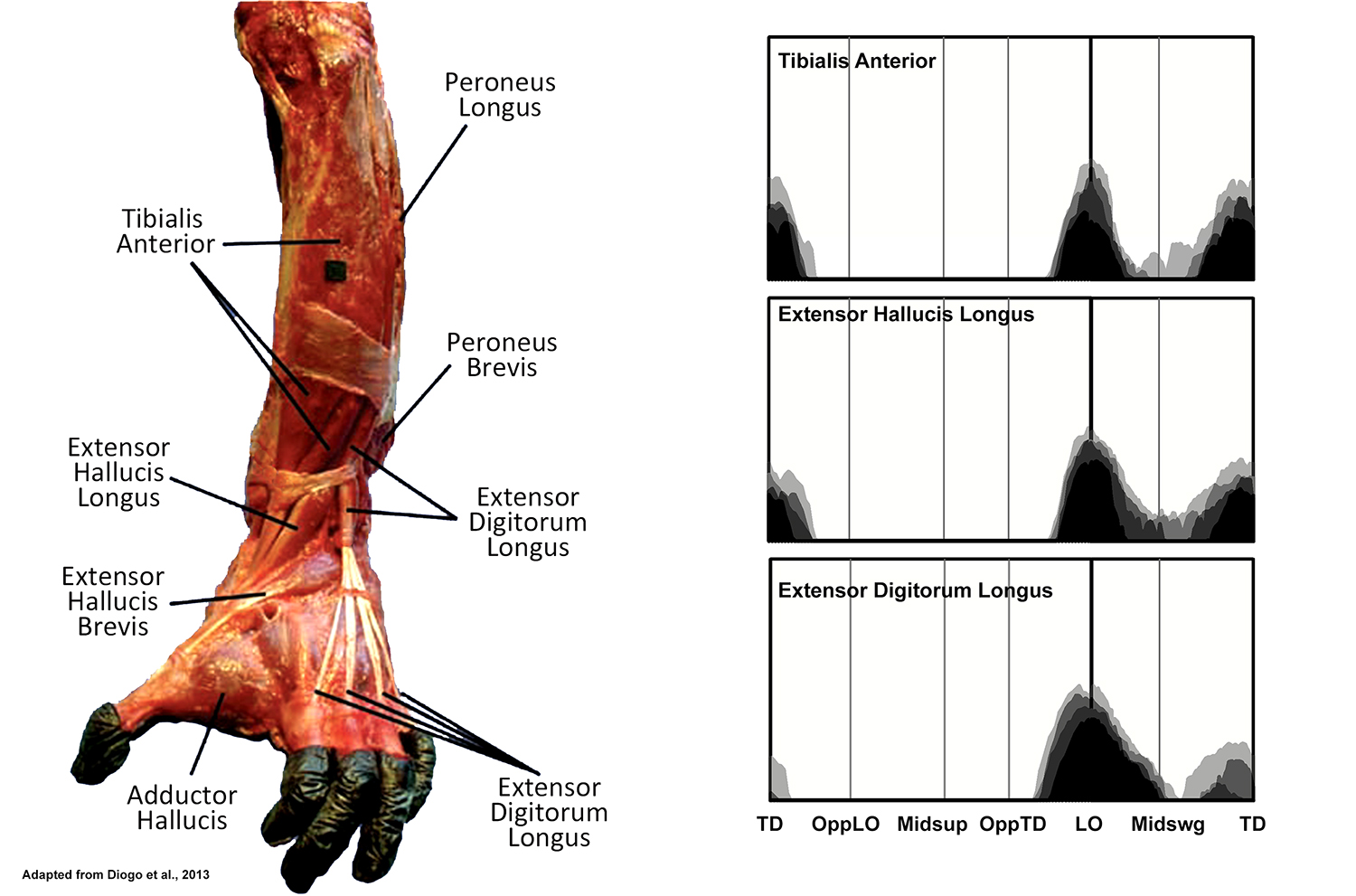 Tibialis anterior, extensor hallucis longus and extensor digitorum longus are all located in the anterior tibial compartment, and despite different distal attachments, all display a similar pattern of recruitment during bipedal walking.  As in humans, all become active during the transition from support to swing phase, dorsiflexing the ankle to help lift the toes off of the ground.  The EMG activity then diminishes in the middle of swing phase, and a second burst is observed in tibialis anterior and extensor hallucis longus. The similar second burst of activity observed in humans is associated with dorsiflexion of the ankle in preparation for heel strike. However, while McNeill et al. (2015) confirm an initial period of dorsiflexion during the first half of swing phase, they report that thereafter the ankle undergoes plantar flexion leading up to touchdown.  The second burst of activity in tibialis anterior and extensor hallucis longus, therefore, is more related to inversion of the foot correlated with the tendency of the chimpanzees to touchdown on the lateral side of their foot. 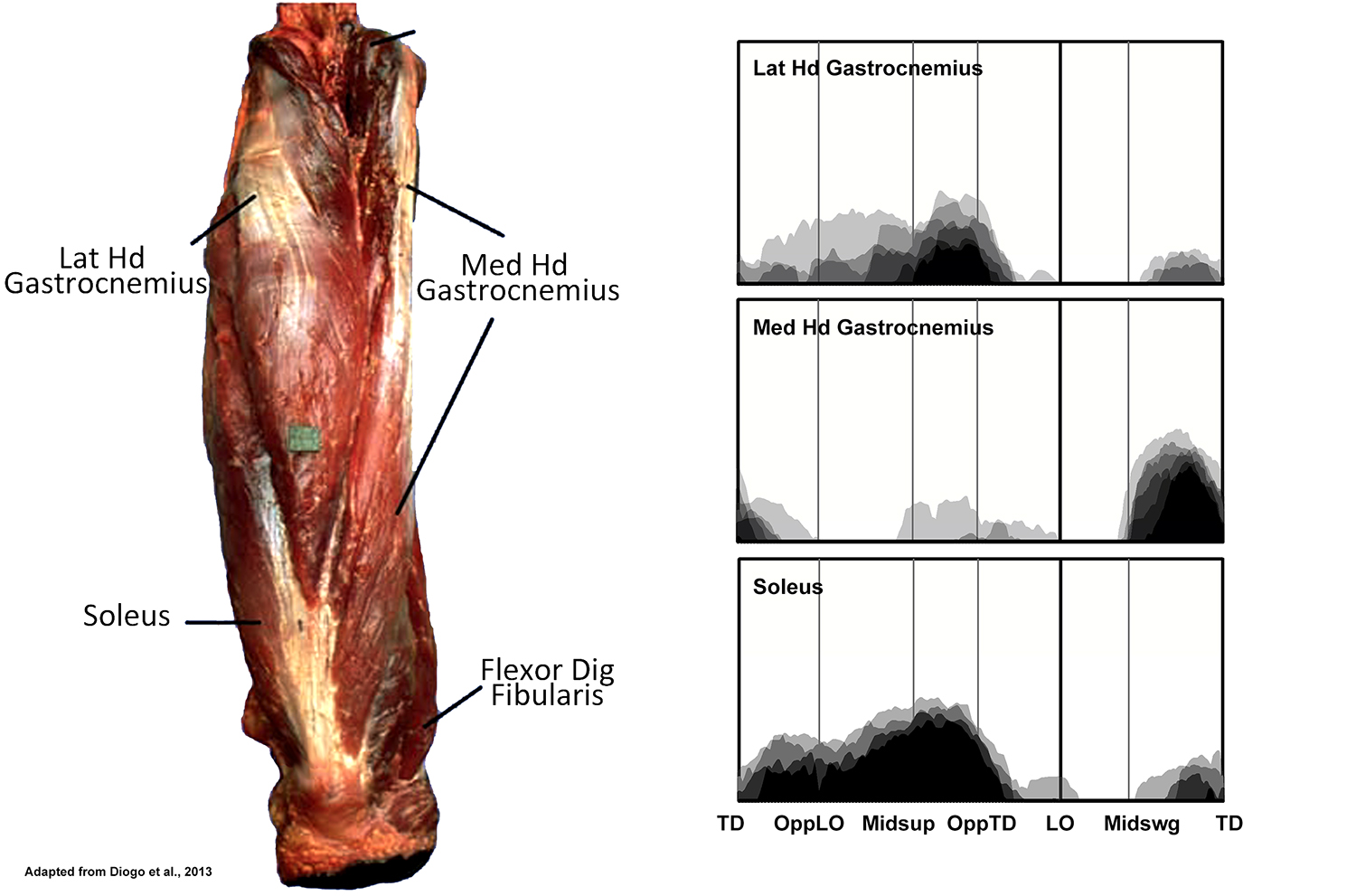 EMG activity profiles for the gastrocnemius and soleus in chimpanzees during bipedal walking. Illustration by Susan Larson, nd 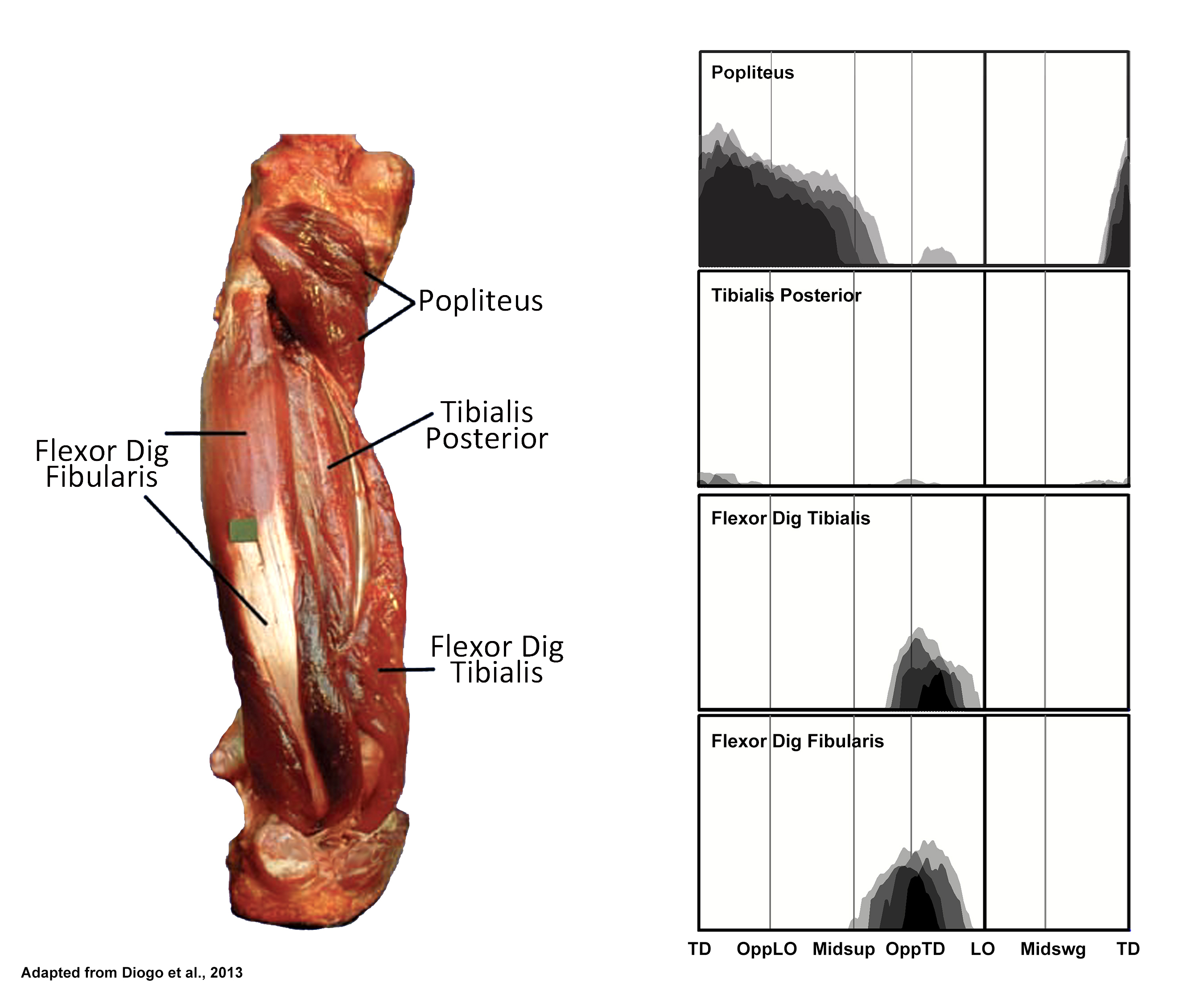 Popliteus is active during support phase as in humans although the activity ends a little earlier in chimpanzees.  It presumably is playing some rotatory role at the knee, but as in humans, its exact contribution is not entirely clear.

Tibialis posterior is a substantial muscle in chimpanzees but is essentially inactive during bipedal walking.  This is in contrast to humans who recruit tibialis posterior through much of support phase. 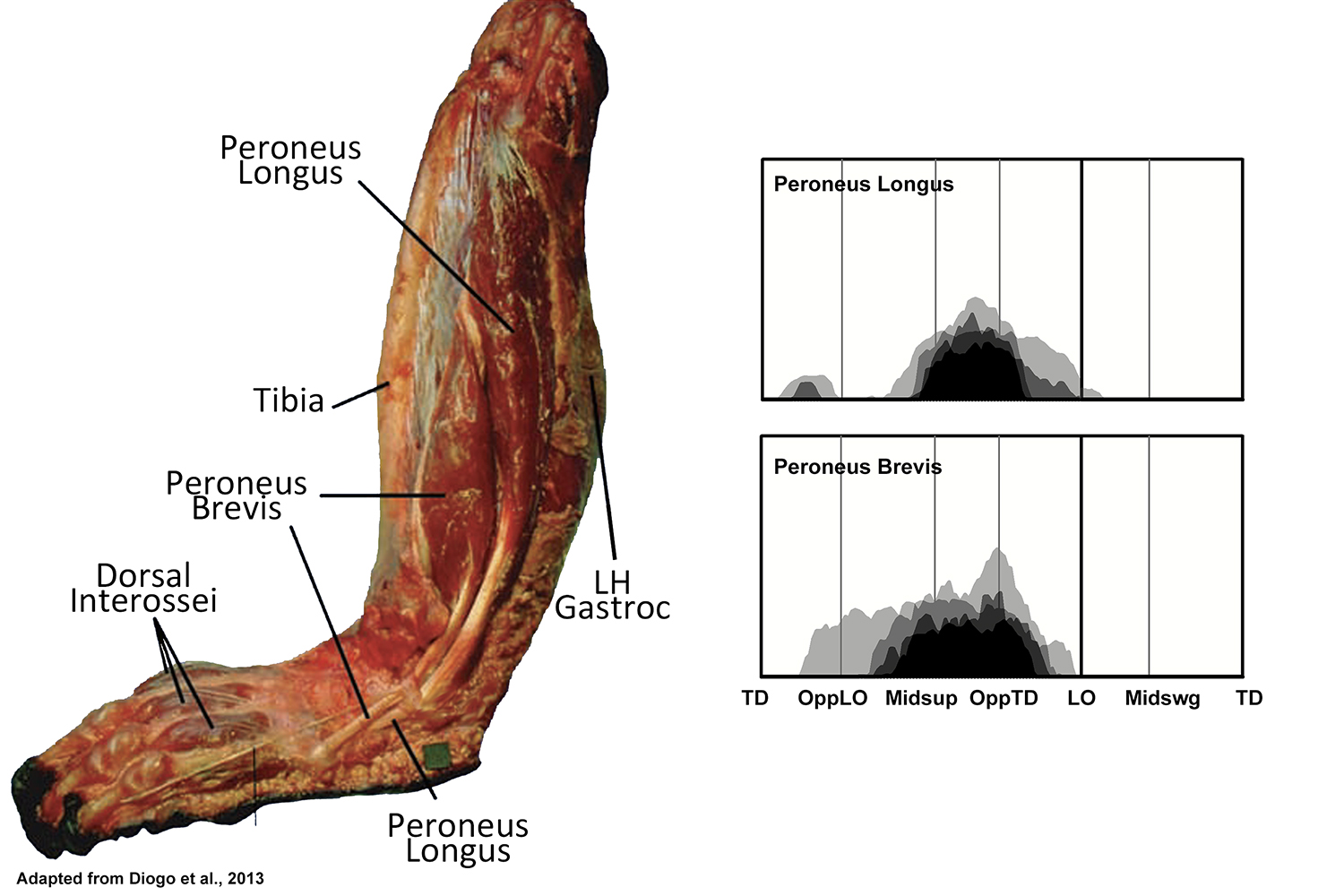 EMG activity profiles for the peroneus longus and peroneus brevis in chimpanzees during bipedal walking. Illustration by Susan Larson, nd

Peroneus longus and peroneus brevis are both active during the latter half of support phase of bipedal walking, with activity in peroneus brevis beginning a little earlier than that of peroneus longus.  This pattern of recruitment is different than what has been reported for chimpanzees by Jungers et al. (1993), although it is similar to what they report for gibbons and spider monkeys.  It is also similar to what has been reported for humans, and like humans may be contributing to support of the lateral side of the foot, or to transfer the foot’s center of pressure medially during support phase.