As input into the musculoskeletal model, four full strides at average walking speeds for each animal were completely digitized.  For these strides, the footfalls were isolated on the four force plates without any overlap, and markers were visible in at least two of the cameras throughout the entire strides, with only short gaps that could be interpolated. The experimentally determined marker positions were used to optimize and validate the hind limb motion of the musculoskeletal model. 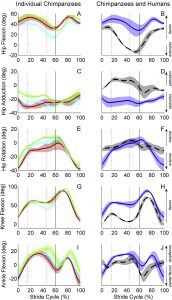 Hip, knee and ankle angles over a walking stride for three individual chimpanzee subjects, and for chimpanzees compared to humans. From O’Neill et al., 2015, Fig. 5

The common chimpanzee (Pan troglodytes) is a facultative biped and our closest living relative. As such, the musculoskeletal anatomies of their pelvis and hind limbs have long provided a comparative context for studies of human and fossil hominin locomotion. Yet, how the chimpanzee pelvis and hind limb actually move during bipedal walking is still not well defined. Here, we describe the three-dimensional (3-D) kinematics of the pelvis, hip, knee and ankle during bipedal walking and compare those values to humans walking at the same dimensionless and dimensional velocities. The stride-to-stride and intra-specific variations in 3-D kinematics were calculated using the adjusted coefficient of multiple correlation. Our results indicate that humans walk with a more stable pelvis than chimpanzees, especially in tilt and rotation. Both species exhibit similar magnitudes of pelvis list, but with segment motion that is opposite in phasing. In the hind limb, chimpanzees walk with a more flexed and abducted limb posture, and substantially exceed humans in the magnitude of hip rotation during a stride. The average stride-to-stride variation in joint and segment motion was greater in chimpanzees than humans, while the intraspecific variation was similar on average. These results demonstrate substantial differences between human and chimpanzee bipedal walking, in both the sagittal and non-sagittal planes. These new 3-D kinematic data are fundamental to a comprehensive understanding of the mechanics, energetics and control of chimpanzee bipedalism. (Journal of Human Evolution 86, 32-42) 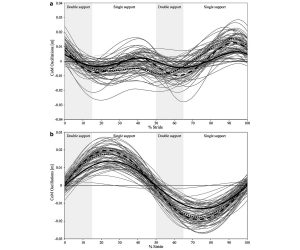 Vertical (a) and mediolateral (b) fluctuations of the CoM for bipedally walking chimpanzees (Demes et al. 2015)

Based on studies using human subjects who were asked to walk with bent hips and knees, it has been suggested that this form of bipedalism would have been too energetically costly for early human ancestors.  However, this is not a natural gait for humans.  To further explore this question, collected kinematic and kinetic data on chimpanzee bipedal locomotion were used to explore their center of mass mechanics and whether their bent-hip, bent-knee form of walking precludes any potential for the kinetic and potential energy exchange that characterizes modern human walking. The results have been published in the following paper: Center of mass mechanics of chimpanzee bipedal walking (Demes et al. 2015). The abstract of this paper is as follows:

Center of mass (CoM) oscillations were documented for 81 bipedal walking strides of three chimpanzees. Full-stride ground reaction forces were recorded as well as kinematic data to synchronize force to gait events and to determine speed. Despite being a bent-hip, bent-knee (BHBK) gait, chimpanzee walking uses pendulum-like motion with vertical oscillations of the CoM that are similar in pattern and relative magnitude to those of humans. Maximum height is achieved during single support and minimum height during double support. The mediolateral oscillations of the CoM are more pronounced relative to stature than in human walking when compared at the same Froude speed. Despite the pendular nature of chimpanzee bipedalism, energy recoveries from exchanges of kinetic and potential energies are low on average and highly variable. This variability is probably related to the poor phasic coordination of energy fluctuations in these facultatively bipedal animals. The work on the CoM per unit mass and distance (mechanical cost of transport) is higher than that in humans, but lower than that in bipedally walking monkeys and gibbons. The pronounced side sway is not passive, but constitutes 10% of the total work of lifting and accelerating the CoM. CoM oscillations of bipedally walking chimpanzees are distinctly different from those of BHBK gait of humans with a flat trajectory, but this is often described as “chimpanzee like” walking. Human BHBK gait is a poor model for chimpanzee bipedal walking and offers limited insights for reconstructing early hominin gait evolution. (American Journal of Physical Anthropology 156: 422-433)

While collection of bipedal walking data to inform and validate the computational chimpanzee model was the central focus of the Chimpanzee Bipedalism Project, every effort was made to also accommodate students interested in pursuing research with the chimpanzee subjects.  Several Stony Brook University undergraduate students assisted in various aspects of data analysis and three Stony Brook graduate students undertook independent research projects, two of which developed into dissertations, in addition to a graduate student from George Washington University. To this end, kinematic and kinetic data for other gaits (quadrupedal overground and simulated arboreal locomotion, vertical climbing, bipedal and tripedal load carrying) were also documented using the whole body marker set. 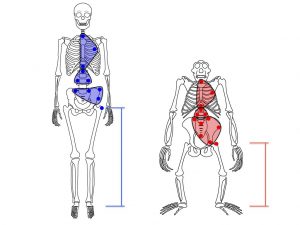 Nathan Thompson undertook an analysis of chimpanzee trunk and head motion during locomotion as part of his dissertation on the Kinematics and Evolution of Upper Body Stability in Hominins (Thompson, 2016).  For his recordings, additional markers were placed on the head and the trunk of the chimpanzee subjects to define a head segment and three trunk segments to capture motion within the trunk as well as document head stability during locomotion.

A description of the rotational motion within the chimpanzee trunk has been published in the following paper, Surprising trunk rotational capabilities in chimpanzees and implications for bipedal walking proficiency in early hominins, (Thompson et al., 2015).  An abstract of that paper is as follows: 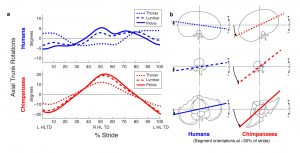 Mean angular motion of all trunk segments over a stride for humans and chimpanzees from Thompson et al., 2015, Fig. 1

Human walking entails coordinated out-of-phase axial rotations of the thorax and pelvis. A long-held assumption is that this ability relies on adaptations for trunk flexibility present in humans, but not in chimpanzees, other great apes, or australopithecines. Here we use three dimensional kinematic analyses to show that, contrary to current thinking, chimpanzees walking bipedally rotate their lumbar and thoracic regions in a manner similar to humans. This occurs despite differences in the magnitude of trunk motion, and despite morphological differences in truncal ‘rigidity’ between species. These results suggest that, like humans and chimpanzees, early hominins walked with upper body rotations that countered pelvic rotation. We demonstrate that even if early hominins walked with pelvic rotations 50% larger than humans, they may have accrued the energetic and mechanical benefits of out-of-phase thoracic rotations. This would have allowed early hominins to reduce work and locomotor cost, improving walking efficiency early in hominin evolution. (Nature Communications DOI : 10.1038/ncomms9416)

For his dissertation project, Nickolas Holowka analyzed the detailed motion of the chimpanzee foot during bipedal gait, quadrupedal walking both overground and on simulated arboreal supports, and climbing up a vertical tree trunk (Kinematics of the chimpanzee foot during terrestrial and arboreal locomotion, Holowka, 2015).  For these recording sessions, multiple markers were placed on the foot and leg to capture 3D motion at the ankle joint, subtalar and transverse tarsal joints, and the metatarsophalangeal joints. A smaller space was calibrated for this purpose that covered the stance phase of the distal limb, and cameras were focused in on this smaller space. 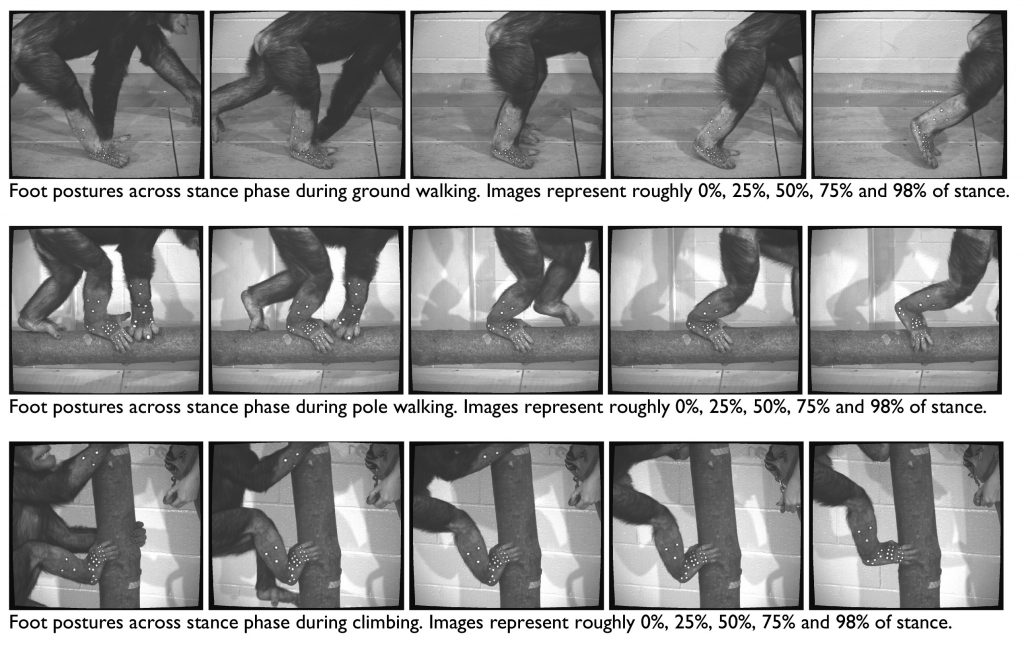 Comparisons of chimpanzee foot postures on different substrates from Holowka, 2015.

Kinematic data from the feet reveal that chimpanzees use less midfoot joint motion overall during bipedal walking than humans.  These results have been published in the following paper, Chimpanzee and human midfoot motion during bipedal walking and the evolution of the longitudinal arch of the foot (Holowka et al. 2017).  An abstract of that paper is as follows:

The longitudinal arch of the human foot is commonly thought to reduce midfoot joint motion to convert the foot into a rigid lever during push off in bipedal walking. In contrast, African apes have been observed to exhibit midfoot dorsiflexion following heel lift during terrestrial locomotion, presumably due to their possession of highly mobile midfoot joints. This assumed dichotomy between human and African ape midfoot mobility has recently been questioned based on indirect assessments of in vivo midfoot motion, such as plantar pressure and cadaver studies; however, direct quantitative analyses of African ape midfoot kinematics during locomotion remain scarce. Here, we used high-speed motion capture to measure three-dimensional foot kinematics in two male chimpanzees and five male humans walking bipedally at similar dimensionless speeds. We analyzed 10 steps per chimpanzee subject and five steps per human subject, and compared ranges of midfoot motion between species over stance phase, as well as within double- and single-limb support periods. Contrary to expectations, humans used a greater average range of midfoot motion than chimpanzees over the full duration of stance. This difference was driven by humans’ dramatic plantarflexion and adduction of the midfoot joints during the second double-limb support period, which likely helps the foot generate power during push off. However, chimpanzees did use slightly but significantly more midfoot dorsiflexion than humans in the single limb support period, during which heel lift begins. These results indicate that both stiffness and mobility are important to longitudinal arch function, and that the human foot evolved to utilize both during push off in bipedal walking. Thus, the presence of human-like midfoot joint morphology in fossil hominins should not be taken as indicating foot rigidity, but may signify the evolution of pedal anatomy conferring enhanced push off mechanics.  (Journal of Human Evolution 104, 23-31) 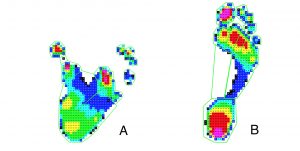 Plantar pressure distributions time-averaged across stance for a chimpanzee (A) compared to a human (B) from Holowka, 2015

As part of his dissertation entitled, Fossil Hominin Footprints and the Dynamics of Footprint Formation (George Washington University, 2014), Kevin Hatala collected foot pressure and 3D footprint data of bipedal chimpanzees walking through sediment leaving imprints that were stereophotographed and their depth profiles evaluated.  This data was used in this analysis of the early hominin Laetoli footprints entitled, Laetoli footprints reveal bipedal gait biomechanics different from those of modern humans and chimpanzees (Hatala et al., 2016). The abstract from that paper is reproduced here:

Bipedalism is a key adaptation that shaped human evolution, yet the timing and nature of its evolution remain unclear. Here we use new experimentally based approaches to investigate the locomotor mechanics preserved by the famous Pliocene hominin footprints from Laetoli, Tanzania. We conducted footprint formation experiments with habitually barefoot humans and with chimpanzees to quantitatively compare their footprints to those preserved at Laetoli. Our results show that the Laetoli footprints are morphologically distinct from those of both chimpanzees and habitually barefoot modern humans. By analysing biomechanical data that were collected during the human experiments we, for the first time, directly link differences between the Laetoli and modern human footprints to specific biomechanical variables. We find that the Laetoli hominin probably used a more flexed limb posture at foot strike than modern humans when walking bipedally. The Laetoli footprints provide a clear snapshot of an early hominin bipedal gait that probably involved a limb posture that was slightly but significantly different from our own, and these data support the hypothesis that important evolutionary changes to hominin bipedalism occurred within the past 3.66 Myr. (Proceedings of the Royal Society B DOI: 10.1098/rspb.2016.0235)

In addition, a collaborative project between Hatala and Holowka combining foot pressure data and simultaneous 3D kinematic data on two chimpanzees and a comparative sample of humans is nearing completion (Hatala and Holowka, in prep).

For many recording sessions a set of forelimb markers were included, and a project on chimpanzee wrist postures during quadrupedalism is underway (Thompson et al., in progress). Ongoing research is also devoted to quantifying the foot strike postures and forces of chimpanzees in bipedal and quadrupedal locomotion, testing in particular whether heel striking is associated with an impact transient force (Holowka et al., in prep.). The kinetic data set was also mined for complete stride ground reaction forces for bipedal load carrying.